From an idea in 2009 to a movement a decade later…

From the time I first learned about the power of plant-based nutrition in 2003, I knew immediately that we needed a better way to describe it. The “v” words (vegan and vegetarian) just weren’t getting it done for me. Here’s why:

Background. During my first six months of researching the optimal diet for humans in 2003, I studied everything from A to Z, literally…from Atkins to Zone, but finally settled on the scientific position of Dr. T. Colin Campbell of Cornell and the clinical successes of five medical doctors (Neal Barnard, Caldwell B. Esselstyn, Jr., Joel Fuhrman, John McDougall, and Dean Ornish), all of whom had discovered the healing power of plant-based nutrition on their own and were already healing their patients with it.

All of their stories are shared in Chapter 1 of our 2011 book, Healthy Eating, Healthy World. Since that time, I have had the good fortune to get to know all of those pioneers and learn more about their work. They are also featured in our second book, the 4Leaf Guide to Vibrant Health, published in 2015.

Early on, I noticed that there was a fair amount of disagreement among the group on a few minor topics, but observed that they did agree on the most important piece. I concluded from my study of their work that they all agreed with the definition expressed by the Cornell professor who led the largest human nutrition study in history. This concise statement summarizes his entire life’s work in nutritional science:

“The closer we get to eating a diet of whole, plant-based foods, the better off we will be.” –-T. Colin Campbell, PhD

How simple is that? So, I thought, let’s set up a scale and assess the quality of a diet-style based on how close it is to Dr. Campbell’s perfect diet (one in which all of our calories would be derived from whole, plant-based foods, still in nature’s package).” We set the top bar at 80% (or more) of our calories from whole plants for 4Leaf, 60% for 3Leaf and so forth. Simple, easy, positive, and effective.

Along the way, we discovered that roughly 90% of the western population of the world is eating below our 1Leaf level, deriving less than 20% of their calories from whole, plant-based foods. We established two additional levels for them:

Unhealthful Diet (UD) for people who’re deriving less than 10% of their daily calories from whole plants.

Better than Most (BTM) for people deriving between 10% and 20% fo their calories from whole plants. 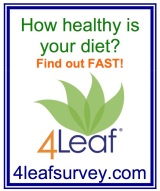 Logo design and 4Leaf Survey. The logo design was completed in 2010 and was ready in time for the Healthy Eating, Healthy World book release in 2011. Then, in early 2012, I got the idea for a survey from Dr. Walter Veith, who in his lectures, used a simple “yes-no” survey to get an idea of how healthy the people in the audience were eating.

With an emphasis on simplicity, I began testing various combinations of questions and scoring methods in March of 2012. After refining and tweaking it for about six weeks, I put a self-scoring, one-page survey on my website in May of that year, and the 4Leaf Survey was born.

The whole idea with the twelve multiple-choice questions was to enable us to accurately estimate the percentage of one’s daily calories that are derived from whole plants. We’re not trying to measure calories from each food but rather identify each person’s overall pattern of eating.

And after seven years and hundreds of thousands of iterations, we have been told by doctors and many others who take the survey that is amazingly accurate in doing it was designed to do: estimate how close one is coming to eating the optimal diet as defined by Dr. T Colin Campbell of Cornell University.

In 2014, we have launched the online version at 4leafsurvey.com, which you can access by clicking the image above. We developed that online version in partnership with the T. Colin Campbell Center for Nutrition Studies and it is now being used in their highly successful plant-based nutrition course through the cCornell division of Cornell University. Click here to view that Cornell version.

Feedback. So far, the response has been over 99% positive. Not only is the 4Leaf diet-style helping people improve their diets, but it is also helping them share their secrets of healthy eating with others. The top six reasons we’ve heard regarding why people like this system so much are as follows: 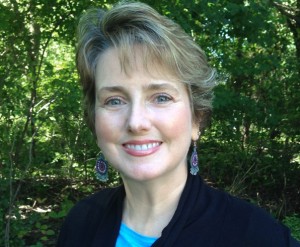 By far, the best feedback that I have received is from Dr. Kerry Graff, who began using the survey and other 4Leaf materials in the spring of 2014 throughout her 800-patient family medicine practice in Canandaigua, NY. As she says, the results have been a “Huge Freakin’ Success.” In her own words:

Since then, we have co-authored a book and continue to collaborate as we bring the simple 4Leaf model to the world.

The Future of 4Leaf. Our goal is for 4Leaf  & the 4Leaf Survey to become the world’s most-used tool for measuring and reporting degrees of healthy eating against the optimal diet for humans as defined by Dr. T. Colin Campbell.

This simple tool provides a common ground vehicle of understanding that may help jump-start the much-needed process of moving humankind back to a way of eating that promotes health, hope and harmony on planet Earth.

We hope that our simple and easy to compute 4Leaf score will become the world’s next, and most powerful, vital sign in medicine.